General introduction of the history of moncalieri 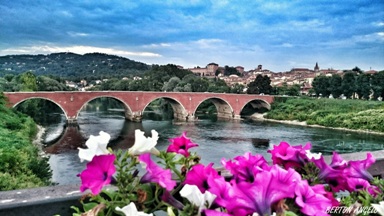 Moncalieri, a Piedmont city near Turin, has almost two thousand years of history. Romans, Longobards, and Franks had passed by its primitive settlement: Testona. The fights between the nearby Asti and Chieri for the possession of traffic and markets determined, from the beginning of the thirteenth century, the development of the fortified town on the slopes of the hill, to the barrier of the river Po. The control of the passage on the bridge it was run by the Templars.

In the context of the incessant maneuvers of supremacy between the Papacy and the Empire, the lordships made their way, such as the Savoy House, first ducal and finally royal. The castle was founded as a fortification to defend the crossroads of roads, the river port, the bridge towards Turin and the rich mercantile and agricultural community. The building was gradually transformed, between the seventeenth and eighteenth centuries, into a grand residence in the manner of the castles of the ruling Houses of all Europe. It was the summer residence of Vittorio Emanuele II, first king of Italy.

The historical events, the architectural heritage, the landscape position, the hill full of noble villas and gardens of particular beauty, the proximity with Turin - the first capital of Italy - have made Moncalieri one of the most beautiful places in the area. The Castle, together with other palaces and estates in Piedmont, in 1997 was entered on the UNESCO World Heritage List with the site "Residenze Sabaude".

Moncalieri is an obligatory point of passage: important roads flow right here, narrow between river and hill. The control of road and river traffic was assured ever since the Templars guarded the bridge over the Po, and is the very reason for the birth of the City.

Walking through the historic center you will find the imposing Royal Castle and the Piazza Vittorio Emanuele II, which overlooks the Gothic church of Santa Maria della Scala (which houses the relics of the patron, the Blessed Bernard of Baden), the Civic Palace and beautiful buildings that belonged to the most important medieval families. At the end of the square, the Via Carlo Alberto is majestically closed by the neoclassical façade of the Real Collegio: the institute was inaugurated by King Carlo Alberto in 1838 and was intended for the education of young scions of nobility.

You can walk the streets of the oldest urban nucleus, appreciating the elegant facades of the aristocratic palaces, churches, convents, courtyards, narrow alleys, arcades, discovering testimonies ranging from Gothic to Renaissance and Baroque. The panoramic paths on the hill, reaching up to the town of Revigliasco and Colle della Maddalena, reveal glimpses and unforgettable landscapes on the hills and on the entire line of the Alpine peaks. In 2016, the entire territory of CollinaPo was recognized as the UNESCO MAB Biosphere Reserve.

Various traditional specialties have been preserved in horticulture and floriculture. Today Moncalieri, with its nearly 60,000 inhabitants, is the largest city of the belt of Turin and the fifth of Piedmont, and is a growing cultural and tourist destination, thanks to the civic library (the driving force of culture, art, accessibility and technological innovation, among the most important in the Metropolitan City of Turin), the excellent theatrical and dance programming of Fonderie Limone (Teatro Stabile di Torino), cultural events and activities.

The detailed history of Moncalieri .